Shade Grown Coffee is For The Birds

No really, it is. There’s even a certification for it from the Smithsonian. The first sustainable coffee congress was in 1996 and the shade issue emerged out of that meeting as a sustainable alternative to ‘sun-grown’ coffee with two certifications following, Rainforest Alliance and Smithsonian Migratory Bird Friendly.

I personally get overwhelmed by the sheer amount of certification information on food packaging these days and it’s hard to filter through and decide what’s really important. For example you’ve got the good old USDA circle, the non-GMO butterfly, Fair For Life, Kosher, Gluten Free, Whole Grain, etc., ad nauseam. By the time they squeeze them all on there you can’t even read what the product is. But this one is a little different and worth looking for. 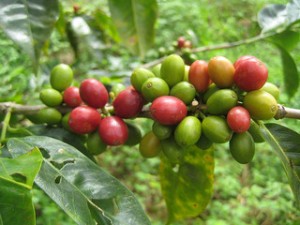 The Smithsonian Migratory Bird Center is the certifying body for ‘Bird Friendly Coffee’. You might be wondering about the relationship between birds and coffee and how one affects the other. Throughout history coffee has developed into a plantation crop. What that means is that it’s moved from being something that people grow in conjunction with other fruits, veggies, and animals to being a monoculture. It’s usually related to supply and demand. If you grow what the people want, you make a lot money and grow old happy. Not quite. Monoculture farming has a legacy of being bad for the land, plus , you’ve cut out other money making crops and put all of your eggs in one basket. When you keep growing the same thing over and over you leach nutrients from the soil which causes erosion to become a problem, you allow more carbon to be released into the atmosphere and  you need to artificially feed the plants because the soil can’t do it by itself so now you introduce chemical farming. That all sounds pretty bad so how do the birds help?

Certified Bird Friendly coffee is about birds but it’s really about ecology. The birds are the canary in the coal mine, their disappearance signifying that indigenous species of flora and fauna are dying out. Traditionally coffee shrubs were grown in the shade of big trees which provided more than just respite for the migratory birds. Those trees provided protection for the coffee plants in the form of catching rainwater, dropping leaves that would eventually compost and feed the shrubs, and housing insects, amphibians, and reptiles that all contribute to a healthy ecosystem. In return the birds helped control the insect population, particularly the coffee borer bug, or broca, which like to eat coffee plants.

It was good for the farmers too. Not only did they spare themselves from having to spend additional money on chemicals to help them farm, they didn’t expose themselves to disease from those chemicals. The shade trees provided medicinal herbs in some cases that could be used personally or sold as additional crops. Today they also get a higher premium for their coffee, which incents them to grow this way since shade growing typically yields less than sun-grown coffee.

When you’re perusing the coffee next time you shop look for the Bird Friendly logo. What it literally means is this. The farm must have a canopy of at least 12 meters, a diverse shade tree component with at least 10 species of preferably native trees, a foliage cover of at least 40%, and finally structural diversity where the main canopy has an understory layer and an emergent layer creating visible strata of vegetation. Their certification also includes being certified organic which is great because no chemicals are used but it’s also great because that certification carries an audit trail so you know that the coffee you are drinking and buying really does come from a farm that’s doing the right thing.

Unlike organic certification there is no turnover period for farms to become bird friendly, this particular certification you either are or aren’t. We are in a situation of preservation right now and I hope that the Smithsonian eventually tries to help convert rather than just certify. Today the certification lasts three years so the farms are getting checked on periodically to continue staying certified.

If this topic interests you the Smithsonian has a great website devoted to it. Robert Rice who heads up the certification program will occasionally lead seminars at the Smithsonian. I caught one last May and was totally engrossed. It’s easy to remove yourself from a situation that’s in another part of the world but remember, our Baltimore Orioles spend their winters in South America so the issue does truly hit home.

1 Response to Shade Grown Coffee is For The Birds