We are a community of thoughtful, progressive, hard working people. We are diverse. We strive to understand and learn from our differences. We respect unusual ideas. We value teamwork and take pride in the result of our efforts.  We want to restore the environment, and a lot of our efforts are pointed directly at that goal.

We’re obsessed with selecting the best-tasting, most beautiful 100% organic produce available.  We work with local farms to provide many regional favorites.  We have a huge selection of gluten-free ingredients and goodies, tons of local and organic foods of all kinds, and clean, organic meats. We’re crazy about our incredible variety of health supplements, herbs, plant-based cosmetics and body care products.  Raw foods and vegan foods are also near & dear to us.  We make sure our prices are the best available in any area natural foods store.

Additionally, we opened Mighty Healthy Pet in 2008, a natural product store for pets, in College Park. Our specialty is whole, organic, raw foods for pets, as well as environmentally-friendly supplies & toys for pets.

We provide a reusable bag incentive for each bag used at check-out so don’t forget to bring a bunch of reusable bags!

MOM’s banned bottled water in 2009 as part of our Plastic Surgery campaign to reduce plastic in our stores.  Instead, we provide free water: Santevia filtered water in a compostable cup at our customer service desks, or a free gallon of reverse-osmosis water in your own container on each visit (39 cents per gallon for additional gallons).
In addition to banning bottled water, our Plastic Surgery campaign inspired us to replace all sample cups, spoons, forks, coffee cups, straws, napkins, trash bags and produce bags with compostable versions.  We urge our suppliers and neighbor-businesses to reduce their plastic use as well.

As of late 2011, we also Terrapass Your Gas, by collecting zip codes from willing customers we were able to determine average distances our customers travel, and purchase credits to cover those distances. Join us in furthering our environmental stewardship just by shopping at MOMs!

If you’ve shopped at MOMs, you probably already know that we’re wind-powered, sell only sustainable seafood, and we compost or recycle almost everything.  But, you may not know that we provide a ton of Green benefits to our employees, including hybrid car purchase incentives, subsidy for Energy Star appliances, and a Green Household package.

Undoubtedly the most important thing we do, both for our customers and for the environment, is to offer a huge array of certified organic products at reasonable prices.  Purchasing organic products helps ensure that organic farm programs thrive and grow all over the world, as well as in our own region, and it reduces the amount of pesticides and chemicals used on farms.  You will never find a chemically-treated veggie in our produce section.

Here’s a little more info on the history of MOMs. If you’d like to know more about MOMs, feel free to email CustomerService @ MOMsOrganicMarket dot com. 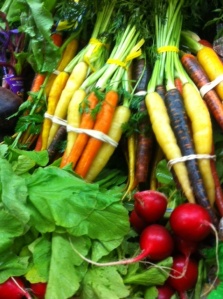 7 Responses to About MOM’s