Brushing Your Teeth Should Feel Good

On a recent early Fall day, in the wee hours of morning, about 20 MOMs employees showed up at the parking lot in College Park and piled our sleepy selves onto a mini-bus for a trip to adorable Kutztown, PA to see the home of the Radius toothbrush.

Founder, Kevin, at his desk

Radius is a brand we’ve carried at MOMs for many, many years. Most of us know Radius for their large and odd-looking toothbrush. Besides those memorable toothbrushes, Radius also makes silk dental floss, and travel containers for toothbrushes, razors, tampons and such.

After a lengthy drive, we got to Radius more than a half-hour late for our tour. We climbed the steps to an old brick building and climbed more steps inside. Suddenly, feeling a little groggy, we found ourselves in a cathedral, of sorts. The radius offices are contained in a beautiful old brick farm building that was restored, painstakingly, by the founder of Radius, Kevin.

After settling in, we learned about the history of toothbrushes (and the lack of innovation and improvement in their design over the past 100 years), and the history of Radius. Kevin and his friend were determined to create a toothbrush that worked with the human hand, not against it. They envisioned a toothbrush that would gently distribute pressure all along the gums and tooth surface, without damaging the gums and tooth enamel.

Their fantasy toothbrush would be easy to hold, and it would feel good to use it. A toothbrush that felt good to use, would help keep us brushing for longer. And it would last a long time, since it would not need, nor would it encourage, the typical human’s habit of jamming and ramming the toothbrush along the teeth. The bristles would remain vigilant, use after use, for many months. This would reduce waste.

Scuba toothbrush in a travel case

From this fantasy, the Original Radius was born: a specimen of ergonomic design and flawless function. It is made in both left-handed and right-handed versions. Later, an extra-flexible version made from recycled rubber, called the Scuba was launched. And years later, Radius offered up the Source toothbrush, which can be fitted for either lefties or righties, and allows for replaceable heads on a recycled-material handle.

A Kidz version, smaller and softer, came to be, and then a Totz version, and a Baby version. All were made specifically with the intent to start humans off on the right, er, foot, when it comes to brushing their teeth. The Baby version is even made to be chewed, as a baby might be prone in the earliest stages of oral health, and to be used by a helpful parent to brush the baby’s teeth for them.

The floss came to be one of my favorite items when Radius came out with a cranberry floss. As many of us in the natural health field know, cranberry helps keep bacteria from sticking to bodily surfaces. 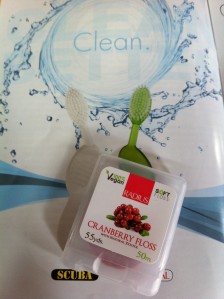 This is one of the ways that cranberry helps alleviate minor urinary infections. Adding cranberry to floss means it can help work against bacteria in those tight little spaces between teeth. I was sold.

At some point during all these years of innovation and product launches, Kevin’s daughter, Saskia, became CEO of Radius. Her tireless enthusiasm is apparent as she continues to push the innovation forward, rejecting subpar prototypes and designs with ease, quite to the dismay of her father and the other designers. That kind of mix of talent can keep everyone in balance, allowing only the best to hit the shelves.

Saskia’s mother is a shipping manager, and she was rushing around checking on orders and putting out proverbial fires as we sat and listened to our lesson.

Saskia shows us the bristling machine

We took a tour, downstairs, of the equipment that bristles the handles and packages the final products. It was cool to see these items were actually being made in the US. I realized right then that I had expected that this kind of production didn’t really exist in the US anymore, having noticed for so many years that almost everything a US consumer uses these days is made in China, Taiwan, or India. It seemed like a mirage.

Saskia wrapped up the afternoon after teaching us a bit more about Radius. We oogled our goody bags and asked questions, said our good-byes and headed out the door. We saw the solar panels next to the building that supply 85% of their power.

During the long trip back, I couldn’t help but realize how cool the Radius company is, and I was excited to try out my new toothbrush. While at first it was a little odd, I soon realized – it felt really good. 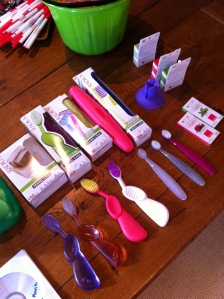 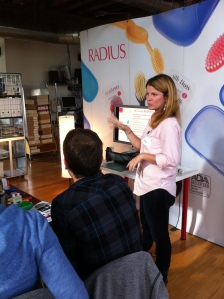