Eyes On Your Kids

You’re the parent. You’re the boss. You make the decisions for your family. Right?

Well, food marketers have noticed that there’s a very influential lobbyist, of sorts, in your midst: Your child.

Children have an impressive repertoire of tactics to convince their parents to make purchases, including whining, crying, pleading, arguing, pretty-pleasing. Even the most stalwart of parents become weathered and worn down by these tactics at times.

The problem is, children aren’t choosing their preferred products based on what’s good for them, or even based on what tastes good. Food marketers have realized kids can be “bought” by their emotions.

Who better to help your child decide how to make life decisions, right? [I hope every parent is thinking “WRONG – that’s my job!”]

A Cornell University study is exposing just how carefully marketing executives are designing product packaging (specifically cereal) to make absolutely sure your child gets the message they want them to get (usually: Buy me!).

The study shows that cereal marketed to kids dons characters with large eyes that are pointed down, towards the eye-level of your child, and perhaps more alarming – that it works. The practice is seen to build brand trust and loyalty.

“Findings show that brand trust was 16% higher and the feeling of connection to the brand was 28% higher when the rabbit made eye contact,” says an article from the Food Psychology Department of Cornell University.

Some healthy food manufacturers are interested in using the same tactics to sell healthier foods to kids. Problem is, if the practice is acceptable in the healthy foods aisle, it will be acceptable in the chips & dip aisle too. What we create is a thick, nearly impassible wall of marketing to kids. On the other side of the wall, is our ability to teach our kids healthy eating habits based on nutrition, calorie needs, and taste (not just artificially-enhanced flavors, but the taste of an actual whole food!). 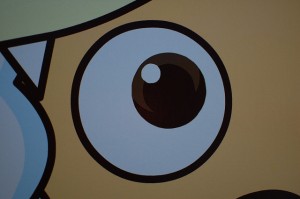 We don’t accept manufacturers using cartoon characters on cigarettes, alcohol, or power saws. Of course, we can tell our kids “No” and we can explain why they can’t play with a circular saw, and we can teach them that cigarettes are unhealthy. But, we don’t accept marketing these products to kids because it’s just wrong. We should be less accepting of these methods in food marketing as well, no matter the food.

You might already know that MOMs has a policy against carrying products that are marketed to kids using branded cartoon characters (note the Barbara’s cereals missing from the shelves currently), but you can read more about the dawn of this policy here:

3 Responses to Eyes On Your Kids