The Heart of the Matter

I wish this was a post about a lovely memory of my father since Father’s Day is upcoming but after I spent a few moments wondering what the heck I was going to get him one thing immediately came to mind – Hearts of Palm. Yup – those weird little stalk things that come in a can. Who has memories of those from childhood? Moi. 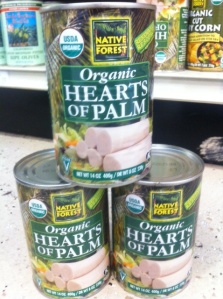 Organic hearts of palm in a can

This time it’s a case of my other set of grandparents influencing my future food decisions. This set of grandparents lived outside of Harrisburg, PA in sleepy little New Cumberland. There was a main street and just one movie theater (with one screen!). Fun consisted of traipsing up to the elementary school playground to climb monkey bars which resulted in callused hands and obnoxious exposure to Campho-phenique or putting together 1000 piece jigsaw puzzles. The only calluses that resulted from that kind of fun are, um, unmentionable. We always had a great time though with whatever activity we were doing.

So back to hearts of palm. My mom’s parents were not gourmet folks by any stretch so I’m not sure how they even came across hearts of palm in the first place. All I know is that they could have been featured on Doomsday Preppers for their amazing collection of canned goods. I liked to secretly hide in the pantry and check out the assortment of soups and boxed mixes they kept hidden.  It came in handy when asked what I wanted for supper because I knew what to suggest. It was also incredibly intriguing to have so much food on hand at one time. Looking back though I suppose that when you experience war and rationing that you have a different perspective on food and survival and you take precautions to be productively paranoid.

Holiday dinners were always fun at my grandparents. It was very Mad Men. My grandmother wore an apron and scolded anyone who got too close to the oven while my grandfather would pass out his homemade cocktails called Pussy Cats (and not because they were tame mind you). There would be dishes of olives and pickle spears would migrate from their lowly melamine bowl to a fancy cut glass dish. This is how I knew I would be in for a treat of hearts of palm. It was only for special holidays that my grandfather would bust out the hearts of palm. Christmas, Easter, Thanksgiving and birthdays.

There was something so exciting about those little slices of deliciousness in my salad that just drove me crazy. I used to beg them off my dad on the off chance that he would send one my way. That was generally a futile effort. As I got older (and a better calendar) I began to take advantage of my grandfather and his persnickety holiday offering of the hearts of palm. That’s right, I beat him at his own game. 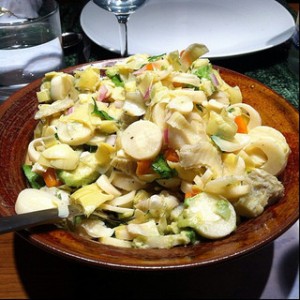 Hearts of palm salad by jhritz

I would strategically arrange for us to eat dinner with them on lesser celebrated holidays such as Columbus Day or Flag Day. Not that they were less important holidays mind you, but the machine had not made them into the commercial days of revelry that some others are. So we would arrive at the house and my first stop after the perfunctory hugs and kisses would be to check the salad. If there were no hearts of palm I would gently but earnestly persuade my grandfather that Columbus Day was indeed a holiday and the only way we could truly distinguish that with our dinner would be to add hearts of palm to our salads.

I know that he appreciated my enthusiasm because he always complied. It was something special we shared and I can never open a can without thinking about him. So as Father’s Day approaches I will be celebrating with my dad, and I will also be celebrating my grandfather who introduced me to the coolest canned vegetable in the whole pantry.

We carry Native Forest organic hearts of palm here at MOM’s and here is an awesome link that explains their harvest process. If you’ve never tried them you’re missing out on a life experience.

1 Response to The Heart of the Matter